Today, we would finally like to introduce the guy who is behind the Safabyte, ComponentForge, XtraComponents and ComponentSoft.net scam. His name is Đặng Minh Thắng, although he usually simplifies this to Thang Dang Ming or Thang Dang. Sometimes he calls himself Thang Minh, Hoang Minh or Jimmy Dang. He was born on June 9th, 1980, which means he just turned 30 today! Until recently, he might have lived or worked at 107 Phố Đức Giang in Long Biên district of Hanoi, the capital of Vietnam.

After finishing his studies at Hanoi - Amsterdam High School, a prestigious Vietnamese high school, he studied information technology at Hanoi University of Technology. In 2003, his team won the first prize at his university's Students Scientific Conference for an emedded system that controls car engines. After finishing his studies, he went on to work for various software companies located in Vietnam and abroad (such as FPT Software, one of the Vietnamese largest software companies).

At this point, Thang Dang was on his way to become a well-known and respected professional. Instead, he turned to the dark side of copyright infringement. In 2007, he launched his grand project: Safabyte, the fraudulent .NET component vendor - selling software based on code stolen from long-standing .NET component vendors such as Rebex, ComponentSpace, ComponentAce or LanapSoft. After changing his brand name and payment processor many times (once every few months recently), he still continues with this practice until this day under XtraComponents and ComponentSoft.net brands.

(You can find a photo of this Thang Dang here or here.)

We have been informed that he currently lives in the United States, possibly studying for an MBA at WKU and residing at the campus (College Heights Blvd 1806, Suite 201). This opens a wide range of opportunities! Perhaps studying law might have been a better choice for him after all? :-)

We just learned that some versions of ComponentForge and Safabyte products include a "kill-switch" or "call-home"-code that occasionally calls a webservice at the vendor's website. This can be both security and reliability threat. Full version of NetXtremeFtp Suite was reported to contain this functionality. We are not sure yet whether their other components or XtraComponents products also suffer from this issue. Needless to say, there is no mention of this anywhere at the vendor's website or in their "privacy policy". But what else to expect from a fraudulent business entity that doesn't even tell you their address or owner name...

When using the purchased "full version" of NetXtremeFtp Suite sold under ComponentForge and Safabyte brands, you may experience the following SfbLicenseException error when ComponentForge or Safabyte websites are not operational:

{"The license key is invalid or has been deactivated. Please contact ComponentForge Sales Team at sales@componentforge.net."}

This exception is raised from a background thread that is started when the FtpClient object's constructor is called. 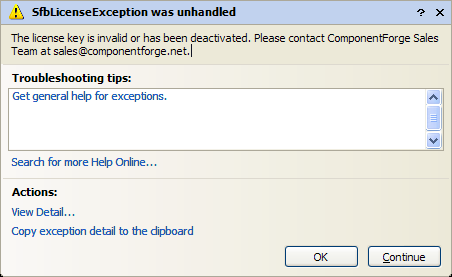 NetXtreme component is trying to validate a license key at runtime by calling a webservice located at ComponentForge or SafaByte websites. The address of this webservice is http://www.componentforge.net/license.aspx?val=key or http://www.safabyte.com/license.aspx?val=key, where "key" is the "license key" you get when you purchase a "license" to these stolen components. The webservice returns a single byte: 1 if the key is valid and 0 if it isn't. This test is not done every time and it only occurs on 3rd, 6th, 9th, 12th, ... day of every month.

Validating license keys by calling a webservice at the vendor's website is a very bad practice because it makes the component completely unusable:

On December 3rd, 2009, some versions of NetXtreme FTP Suite stopped working when both ComponentForge and SafaByte websites were down temporarily. This behavior was only observed in the purchased copies of the components.

It is quite amusing that a Vietnamese software pirate is so concerned about other people pirating his software that he has chosen to offer this crippled version as the "full version" of his product.

This "feature" makes it possible for the vendor to:

Even well-known companies have been criticized for including kill switches in their products. Because ComponentForge/Safabyte/XtraComponents “company” is actually a scam, this is yet another reason to stop using their products immediately. Essentially, all their clients are at the mercy of a software pirate.
Possible security threat?

It is always worrying when a component connects to a webservice at the vendor’s website, and even more so if it was made by a fraudulent entity. For example, it would be extremely easy to "enhance" this to steal their client's passwords as well. Although this doesn't seem to be the case at the moment, the infrastructure is there.

Also, calling a webservice at the vendor's website means that he knows IP addresses of all his clients, which in itself can be a security thread.

Considering that all Safabyte/ComponentForge/XtraComponents products mentioned in this article are illegally based on source code owned by Rebex and other vendors, all customers are advised to cease using them and to replace them with legitimate products by reputable companies, preferrably those that don't call any questinable webservices behind their back.

Big thanks goes to Max, former ComponentForge/Safabyte client, for bringing this issue to our attention!

How to get rich fast? If you are living in a country where copyright law is just for fun and you know how to write software, it's rather easy:

This is exactly what a company (?) called ComponentForge or Safabyte did! Check out our website about ComponentForge/Safebyte scam if you are interested in details.

You'll soon find more posts about this case on this blog. More evidence, more traces, more about the people involved. Remember the book Cuckoo Egg book by Clifford Stoll about tracing a spy in a computer system which started at Berkeley campus back in eighties? Well, we probably won't find a Soviet agent here, but it can be interesting anyway. We already have some various traces to follow...